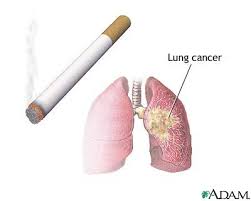 On going through exciting news "Cancer kills 50 Indians every hour" published in CC dated 31st August, I would like to inform readers that Dr Kaul says that tobacco use is the single most important risk factor for various cancers and calculations show every hour 100 Indian smokers are diagnosed with cancer and out of them 50% die hourly. International level figure is 600 smokers diagnosed per hour for cancer and 355 die per hour. Total deaths by cancer are 3 million per year Internationally.

WHO defines smoking: ``A cigarette is a euphemism for a cleverly crafted product that delivers just the right amount of nicotine to keep its user addicted for life before killing the person." Despite all accumulated knowledge on the subject of diseases caused by tobacco products, approximately 154,000 Americans died from lung cancer in 2002. A shockingly high percentage of smokers continue to believe that their cigarettes will not cause them harm. It is dedicated to changing this intolerable ignorance. It is my hope that lung cancer and cigarette smoking Web Page will leave with eyes open to the danger of lung cancer and other diseases caused by tobacco. Researchers suggest smoking of very long duration, high intensity may be associated girls with increased risk of breast cancer. Tobacco smoke contains many potentially harmful substances, including nitrogen oxides, volatile aldehydes, alkenes, and aromatic hydrocarbons, which may act differently and at different stages in the development either of lungs, breast, bladder and cervical cancer.

A recent National Cancer Institute focus group suggests that many ex-smokers believe that they are no longer at risk for lung cancer. This is a dangerous misperception. Unfortunately, some risk of lung cancer persists for many years following smoking cessation. The good news is that the risk diminishes with the passage of time. Many of lung/ breast/ bladder or cervical cancers, more than 90%, are caused by cigarette smoking. There are currently almost fifty million smokers in the United States and another fifty million are ex-smokers. One third of the population of our country is at high risk for this terrible diseases and for multiple other tobacco-related diseases, including cancers of the mouth, tongue, throat, larynx, esophagus, pancreas, bladder and kidney and also at risk for coronary artery disease, peripheral artery disease, gangrene of the legs and stroke.

Some of the carcinogens (cancer-causing chemicals) in tobacco smoke are absorbed from the lungs and get into the blood. From the blood, they are filtered by the kidneys and concentrated in the urine. These chemicals in the urine damage the urothelial cells that line the inside of the bladder. This damage increases the chance of cancer developing. Industries carrying highest risks include the makers of rubber, leather, textiles, and paint products as well as printing chemicals have been linked with bladder or throat cancer. Chemicals called aromatic amines, such as benzidine and beta-naphthylamine, which are sometimes used in the dye industry, can cause bladder, cervical and throat cancer.

Approximately 13,500 women are diagnosed with cervical cancer each year. About 30% of these women will die from the disease because it was diagnosed too late for effective treatment. Sadly, many of these deaths could be prevented with regular screening and early treatment. A very early form of cervical cancer is known as carcinoma in situ. It also may be called noninvasive carcinoma. This abnormality involves only the top layer of cervical cells, not deeper layers of tissue in the cervix or elsewhere in the reproductive tract. Without treatment, carcinoma in situ usually will develop into invasive cervical cancer. Carcinoma in situ occurs most often in smoking women between 30 and 40 years of age. These diseases are believed to increase overall risk. Indeed, the connection between HIV (the AIDS virus) and cervical cancer is so strong that women with the virus are now advised to get a Pap test every 6 months.

The WTO Agreement, for example, calls for foreign products to be treated in the same way as domestic goods. The Agreement on Agriculture, which covers tobacco, calls on countries to reduce trade distorting subsidies and the Trade-Related aspects of Intellectual Property (TRIPs) agreement protects trademarks. This is just one serious problem associated with the trade in illicit tobacco. A trade which is already a global problem and set to grow from $2m to $ 21 billion within 80 years at the cost of lives of many millions. WTO is not just about liberalizing trade, and in some circumstances its rules support maintaining trade barriers, for example to protect consumers, prevent the spread of diseases or protect the environment. But on the contrary WTO is creating a sort of cold war of slow poisoning either to kill energetic people or make them weaker and weaker by toxin of tobacco or chemical pesticides of agriculture to kill not only pest but human beings too by slow poisoning by traces of pesticides which use such inorganic foods.