Ultraviolet (UV) light has shorter wavelengths than visible light. Though these waves are invisible to the human eye, some insects, like bumblebees, can see them! (Image of the bumblebee is courtesty of Mark Cassino.) 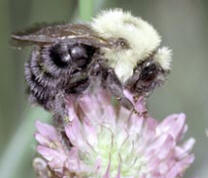 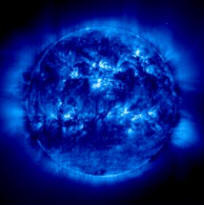 Our Sun emits light at all the different wavelengths in electromagnetic spectrum, but it is ultraviolet waves that are responsible for causing our sunburns. To the left is an image of the Sun taken at an Extreme Ultraviolet wavelength - 171 Angstroms to be exact. (An Angstrom is a unit length equal to 10-10 meters.) This image was taken by a satellite named SOHO and it shows what the Sun looked like on April 24, 2000.