Type 2 Diabetes May be Linked to Pesticide Exposure

, January 25, 2008 (ENS) - Cambridge University scientists are advocating more research into the possible links between environmental pollution and type 2 diabetes, the most common form of the disease. At least 171 million people worldwide suffer from diabetes, according to estimates by the World Health Organization.

In today's edition of the British medical journal "Lancet," Drs. Oliver Jones and Julian Griffin highlight the need to research the possible link between persistent organic pollutants, POPs, and insulin resistance, which can lead to adult onset diabetes.

POPs is a group of chemicals which includes many pesticides such as dieldrin, DDT, toxaphene and chlordane and several industrial chemical products or byproducts including polychlorinated biphenyls, or PCBs, dioxins and furans.

In their commentary, Jones and Griffin cite peer reviewed research which demonstrates a strong relationship between the levels of POPs in blood, particularly organochlorine compounds, and the risk of type 2 diabetes.

"Of course correlation does not automatically imply causation," says Dr. Jones. "But if there is indeed a link, the health implications could be tremendous."

"At present there is very limited information," he said. "Research into adult onset diabetes currently focuses on genetics and obesity; there has been almost no consideration for the possible influence of environmental factors such as pollution." 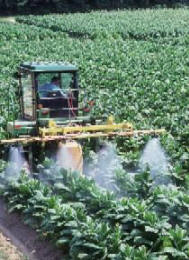 People with high levels of POPs in their blood are more likely to develop insulin resistance, a precursor for type 2 diabetes, according to a study by researchers in Korea that is cited by Jones and Griffin.

Previous research by the same group found a link between POPs and type 2 diabetes. This study confirms that background exposure to chemicals such as organochlorine pesticides and PCBs is also associated with insulin resistance among people who do not yet have diabetes.

Dr. Jones said, "I think research should be carried out to first test the hypothesis that POPs exposure can cause diabetes, perhaps using cell or tissue cultures, so we know for sure if this can occur."

"Assuming POPs can have this effect, the next step would be to try and develop a method of treatment for those people who might be affected," he said.

POPs came into prominence as effective pesticides with the introduction of DDT in the 1940s. But many of these chemicals, including DDT, fell out of favor after they were blamed for the declining number of wild birds and other animals and the possible negative human health effects.

The Stockholm Convention, an international treaty banning a dozen of the world's most dangerous POPs that took effect in May 2004 has helped reduce exposures, but many such chemicals remain in use and even those that have been banned may linger in the environment for years.

Once released, POPs can travel long distances in the atmosphere before they are deposited on land or in water. Humans can be exposed to POPs through diet, occupational accidents and the environment.

As these compounds biodegrade slowly, they continue to find their way into the food chain and ultimately into the blood streams of individuals even though many of these toxins were banned many years ago.

For example, chlordane was banned two decades ago in the United States but continues to be present at high levels in the U.S. food supply.

Because these compounds are fat soluble, they can persist in body fat for very long periods of time following exposure.

It is well documented that significant exposure to POPs can cause negative health effects. The U.S. Environmental Protection Agency states that the pesticide chlordane, for example, can cause cancer, can lead to behavioral disorders in children if exposed before birth or while nursing, and harms the endocrine system, nervous system, digestive system, and liver.

But to date, the link between POPs and type 2 diabetes has only been suggested, not confirmed.

Type 2 diabetes is the most common form of diabetes. In type 2 diabetes, either the body does not produce enough of the hormone insulin or the cells ignore the insulin.

Insulin is necessary for the body to be able to use glucose for energy. When people eat, the body breaks down sugars and starches in the food into glucose, the basic fuel for the body's cells.

Insulin carries the glucose from the blood into the cells. When glucose builds up in the blood instead of going into cells, the cells may be starved for energy. Over time, high blood glucose levels may damage the eyes, kidneys, nerves or heart.

The article by Jones and Griffin, "Environmental pollution and diabetes: A neglected relationship," appears in today's edition of the "Lancet."

Continue to  Investigations of neuropathy