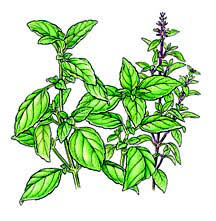 A curious sight in India during the 19th Century was that many Englishmen had adopted the use of a necklace made of the wood of the Basil plant like the ones worn by Hindu holymen. This was not to claim affinity to those over whom they ruled, but rather for more practical reasons for it was scientifically determined and proved that basil provides immunity to electrical impulses and hence acts as preventive to thunder-bolts (lightning). The plant itself is full of electrical energy and hence aids in stimulating blood-circulation. It is said that if one wears the stalk of the basil around the waist, the wearer will be free from afflictions of the waist, liver, spleen, and the generative organs. Because of this property, the basil-stalk necklaces are worn around the neck, hands, and over the heart; and, therefore, it is not surprising that the practice was adopted by the English.


Culpeper, the English physician of old makes a few interesting observations: "This is the herb which all authors are together about, and rail at one another (like lawyers). Galen and Dioscorides hold it not fitting to be taken inwardly; and Chrysippus rails at it with downright Billingsgate rhetoric; Pliny and the Arabian physicians defend it" (Complete Herbal 15). He further adds: ...it was an herb of Mars, and under the scorpion, and perhaps therefore called basilicon, and it is no marvel if it carry a virulent quality with it. Being applied to the place bitten by venomous beasts, or stung by a wasp or hornet, it speedily draws the poison to it. Every like draws his like. Mizaldus affirms, that being laid to rot in horse-dung, it will breed venomous beasts. Hilarius, a French physician, affirms upon his own knowledge, that an acquaintance of his, by common smelling to it, had a scorpion bred in his brain.... To conclude. It expelleth both birth and after-birth: and as it helps the deficiency of Venus in one kind, so it spoils all her actions in another. I dare write no more of it. (15) So much for Culpeper.

In India, the basil (known as Tulsi or Vrinda) is widely used and several myths have grown out of its use both, as a medicinal herb and for religious purposes. The ancient treatises on Ayurveda speak highly of this plant saying that its regular use keeps palate, throat, teeth, gums, bronchus and lungs free of infection. Most traditional Hindu homes grow the plant and believe that an invisible oil permeates the atmosphere thus keeping it clean and free of germs. Further, no snake or scorpion will come near a basil plant and I have personally verified that it also keeps mosquitoes at bay. It is no wonder that the Hindus have accorded spiritual status to the plant and revere it almost as a deity. In fact, the basil is considered to be sacred by many and it is believed that this plant sprouted on its own over the grave of Christ. Christians in Eastern Europe still look upon the plant as a gift of Christ and on St. Basil's day, the womenfolk plant basil seedlings in their gardens with the same fervor as a religious rite. Taking a cue from Christ's resurrection, some even plant basil over the graves of their dear departed in the hope that it might revive the dead!

The uses of basil are many and varied. Most of its claims have been verified scientifically, while others remain in the borderline of scepticism and disbelief. The general uses for which it is prescribed as a home remedy ranges from the common cough and cold to blood-pressure symptoms and even paralysis and hemiplegia. I give below some of the more common ailments and their treatment with the use of basil alone or in combination with other herbs.