Neuropathy is a medical condition in which a person suffers from peripheral nerve damage associated with an underlying disease. 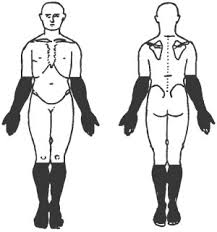 Less than 3% of the world's population is affected but is found that over half of the people suffering from diabetics will develop some degree of nerve damage. The symptoms of neuropathy are usually the only method of diagnosis. Symptoms may involve tingling sensations similar to decreased circulation in the extremities such as numbness or even and pins and needles. A person's  limbs may feel alternately burning hot and icy cold, accompanied by sharp or dull pain and muscle fatigue. These feelings are associated with reduced fine motor coordination, possibly leading to paralysis in extreme cases.

The body's nervous system contains many sensitive paths along which the body can relay electrical information between the senses and the brain. One system of nerves branches out from the spinal cord to sense things like movement, pain, tactile sensation, temperature, etc. When damaged, these functions become scrambled or have reduced sensitivity. Something goes wrong in some part of the nerve. Perhaps it's in the membranous lining of nerve cells in which axons float. Or it could be in the axons themselves, which are connectors responsible for transferring the electrical impulses from one cellular body to the next. Even the nerve cells can get injured.

It is easy to diagnose neuropathy based on the pain suffered by a patient but it is difficult to treat because neuropathy is so commonly idiopathic, which means the doctor doesn't know why the patient has developed peripheral nerve damage. However, some of the causes identified include malnutrition, repetitive motion resulting in carpal tunnel syndrome, herpes virus, HIV/AIDS, exposure to toxins such as alcohol and inherited genetic disorders. When a doctor can identify one of these causes, they can treat the pain at the source by correcting malnutrition or treating diabetes for example. Unfortunately, if the neuropathy is idiopathic, the only available treatment is ongoing, temporary pain management usually with pharmaceutical products. Researchers are still pursuing many paths of study to better understand the process that leads to such widespread neuropathy.

Continue to  Investigations of neuropathy