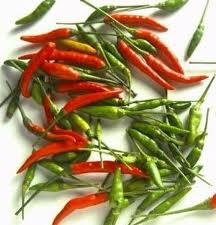 Capsaicin, the active ingredient in chili peppers, is so hot that it can make your mouth feel like it's on fire.

This phytochemical exists in peppers, most likely, to deter animals from eating them, and is also the active component of pepper sprays used for self-defense. Yet for humans, when capsaicin is consumed in a somewhat diluted form, such as in hot sauce, chili peppers or cayenne peppers, it offers a myriad of health benefits.

Chili peppers are typically red or green in color, but there are hundreds of different varieties out there.

Chili peppers come in hundreds of different varieties, each with a unique flavor, color, shape and heat factor. Generally speaking, the hotter the pepper, the more capsaicin it contains.

About 80 percent of the capsaicin in a chili pepper is in its ribs and seeds, which is why much of the heat is removed when these items are taken out.

For those on the daring side, habanero and Scotch bonnet peppers are two of the hottest chili pepper varieties out there -- other than the fiery Indian chili pepper called Naga Jolokia (see the sidebar) -- followed by the somewhat milder Spanish pimentos and Anaheim and Hungarian cherry peppers.

Other popular varieties that vary in their "hotness" include cayenne, chipotle, jalapeno and ancho.

Ready to add a little spice to your life? Here are seven reasons to turn up the heat in your next meal.

A study published in Cancer Research found that capsaicin caused cancer cells to commit suicide. The substance caused almost 80 percent of prostate cancer cells to die in mice, and prostate tumors treated with capsaicin were about one-fifth the size of those in untreated mice.

"Capsaicin inhibits the growth of human prostate cancer cells in petri dishes and mice," says lead researcher Dr. H. Phillip Koeffler, director of hematology and oncology at Cedars-Sinai Medical Center and a professor of medicine at the University of California, Los Angeles.

Further, researchers say capsaicin pills may one day be used to prevent the return of prostate cancer.

The Scoville Scale:
How Hot is Your Pepper?

Hot peppers' heat is measured using the Scoville Heat Scale. While pure capsaicin measures in at over 16 million Scoville Units, most popular varieties rank around 30,000.

Bell peppers make up the baseline, at zero Scoville Units. While the habañero pepper was once thought to be the hottest pepper, measuring in at 300,000 units, an Indian chili pepper called Naga Jolokia was tested in 2000 and received a searing score of 855,000 units!

A topical form of capsaicin is a recognized treatment for osteoarthritis pain, and may also help alleviate pain from diabetic neuropathy.

Capsaicin is also known to inhibit Substance P, a neuropeptide that is the key transmitter of pain to the brain. Substance P can cause swelling of nerve fibers, which may result in headaches and sinus symptoms. Studies have found that capsaicin both relieves and prevents cluster headaches, migraine headaches and sinus headaches.

Capsaicin has potent antibacterial properties that fight and prevent chronic sinus infections, or sinusitis. Because it is so hot, it also helps to stimulate secretions that help clear mucus from your nose, thereby relieving nasal congestion. This phytochemical may also help relieve sinus-related allergy symptoms.

Capsaicin is a potent anti-inflammatory agent. It works by inhibiting Substance P, which is associated with inflammatory processes. Capsaicin works to reverse arthritis, psoriasis and diabetic neuropathy (complete healing of nerves).

A Duke University study found that capsaicin may lead to a cure for inflammatory bowel disease (IBD). The substance can also help to kill bacteria such as H. pylori, which can help prevent stomach ulcers.

Capsaicin is a thermogenic agent, which means it increases metabolic activity. This, in turn, helps to burn calories and fat. Many popular "fat-burning" supplements on the market contain capsaicin, as the substance may significantly increase metabolic activity for over 20 minutes after it's eaten.

Capsaicin may help to protect the heart by reducing cholesterol, triglycerides and platelet aggregation. It may also help the body dissolve fibrin, which is necessary for blood clots to form. Further, cultures around the world that use hot peppers liberally in their meals have significantly lower rates of heart attack and stroke than cultures that do not.