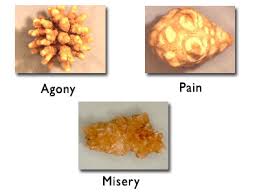 The dibasic amino acid cystine forms by the complexation of two cysteine molecules. Cystine is relatively insoluble, and appears in normal urine in small amounts that are insufficient to cause supersaturation, crystalluria, or stone formation. Cystinuria is a hereditary disorder in which a defect in intestinal and renal tubule transport of cystine and other amino acids results in a 10-fold increase in urine cystine excretion. As a result, the solubility limit of cystine in the urine is exceeded (56). Patients who are homozygous for the disease also over-excrete the other dibasic amino acids lysine, ornithine, and arginine. Heterozygous inheritance is associated variable increases in amino acid excretion and an intermediate increase in cystinuria. Renal stones form in the upper urinary tract as early as the first decade of life. The stones tend to be large, staghorn, and bilateral. Stone formation may manifest as obstruction, infection, hematuria, and renal failure. Cystine stones are visible on standard abdominal radiographs because of the relative density of the sulfur constituent of cystine. Markup" startspan

Therapy is selected to reduce cystine excretion and increase urinary cystine solubility. Large urine volumes of 3-4 liters per day may be effective in some patients. Alkaline pH in the 7.5 range will reduce cystine solubility. However, fluid and alkali therapies are difficult to establish, especially in children. Dietary restriction of the essential amino acid methionine may cause small decreases in cystine synthesis, but is not practical because of the risk of inducing methionine deficiency. When fluid, alkali and dietary therapy fail, pharmacologic therapy may be effective. Thiola and d-penicillamine reduce cystine synthesis by preventing cysteine-cysteine complexation. As a result, more soluble thiol-cysteine disulfides form and are readily excreted in the urine. Both agents have potentially serious side effects and therefore they are not used as first-line treatment

Boil the hair of corn in pot of water after the color of the water slightly changes  to yellow, usually on medium heat or the water starts boiling for a few minutes you can take the pot off the heat source and drink the warm water daily two to three glasses until all stones are gone. Usually out in a day or three.  In one pot put hairs from one corn, best not to reuse them unless you keep them refrigrated.

The Kidney stones will come out as small particles in urine, you can pee in a plastic bottle and see them. The pain will be gone !

Please continue to next page of autonomic neuropathy